Now the first half of the GSoC program 2015 is over and it has been a great time. I compared the time line just recently and I have almost finished all the work that needed to be done for the whole proposal. Here is a list what I have implemented.
I even extended the algorithm to be able handle simple reduction patterns. I did not include this in my proposal. This means that numpy.sum or numpy.prod can be executed with SIMD instructions.

Here is a preview of trace loop speedup the optimization currently achieves. 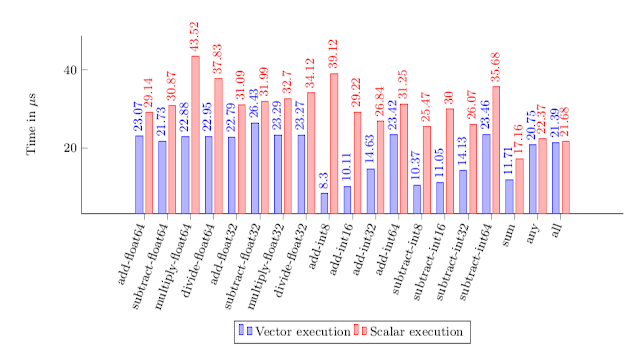 Note that the setup for all programs is the following: Create two vectors (or one for the last three) (10.000 elements) and execute the operation (e.g. multiply) on the specified datatype. It would look something similar to:

After about 1000 iterations of multiplying the tracing JIT records and optimizes the trace. Before jumping to and after exiting the trace the time is recorded. The difference you see in the plot above. Note there is still a problem with any/all and that this is only a micro benchmark. It does not necessarily tell anything about the whole runtime of the program.

For multiply-float64 the theoretical maximum speedup is nearly achieved!

Expectations for the next two months

One thing I'm looking forward to is the Python conference in Bilbao. I have not met my mentors and other developers yet. This will be awesome!
I have also been promised that we will take a look at the optimization so that I can further improve the optimization.

To get even better result I will also need to restructure some parts in the Micro-NumPy library in PyPy.
I think I'm quite close to the end of the implementation (because I started in February already) and I expect that the rest of the GSoC program I will extend, test, polish, restructure and benchmark the optimization.
Posted by Unknown at Wednesday, July 01, 2015